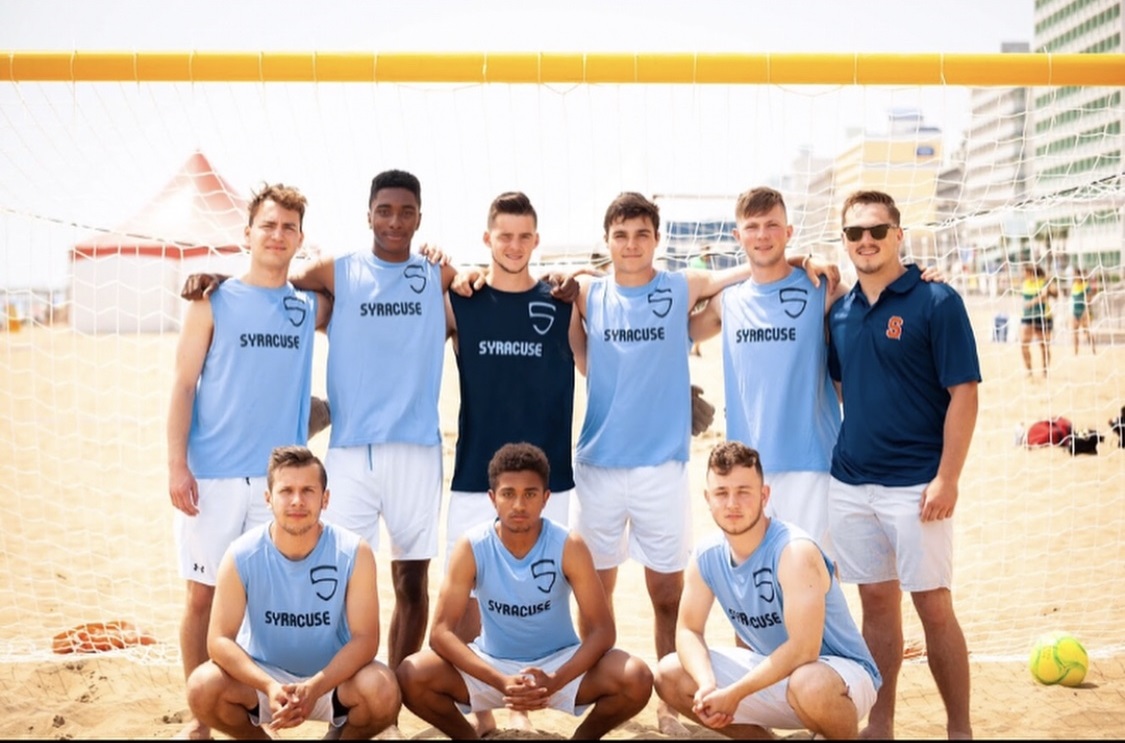 Being an intern here at Sterling Financial Group by day and a professional beach soccer player by night, I figured I’d share the other side of my life and the beautiful game that is beach soccer. Beach Soccer, also known as beach football, is a variation of soccer played on the beach or some type of sand. Many people don’t know, but beach soccer is taking the sports-world by storm, offering various tournaments across the world in beautiful locations gaining popularity and sparking interest everywhere they go including right here in Syracuse, NY. Thus, Syracuse Beach Soccer Club was created, providing a team made up of my close friends and I to represent the city of Syracuse and compete in tournaments around the nation. Playing for Syracuse Beach Soccer Club is a great, exciting experience. Being able to travel to different places with your friends and play the game that many people, including ourselves, are very passionate about. Growing up in Liverpool, NY we don’t have many beaches that we live close to, so we trained at a local sports bar, called Sharkey’s, in order to prepare for whatever tournament we were doing at the time. Now, when we first got started, we were just a group of guys that played soccer for a major portion of our lives and loved it enough to do anything that involved it. Fast forward a couple of months, and we would be competing in our first ever beach soccer tournament at Ontario Beach in Rochester, NY. We didn’t know what to expect with this being the first tournament that we competed in, but with us all being athletes and having that very competitive nature, we just wanted to win the whole thing. After winning the tournament, we were shocked to found out that this was a “preliminary tournament” to qualify for nationals in Clearwater, Florida. Naturally, we were very excited that we would be going to Florida and competing in a National Beach Soccer Tournament, but also excited by the fact that this team was put together just that summer and had the drive to compete and win this tournament. As December arrived, a huge winter storm had hit Syracuse when my friends I were in Florida enjoying the beautiful weather and playing sand soccer. Playing in nationals for our first time, we played against teams that had been there multiple times and different teams from across the nation like California. Despite our lack of experience compared to our competition, we continuously competed to accomplish our goal of winning the whole tournament and bringing the national title back to ‘Cuse! After a full day of competing, we ended up in 3rd place, one point behind the 2nd place team. Going into the final day of the tournament we needed to win our final game and have the 2nd place team lose their game for us to move to 2nd place and have a chance of playing in the finals. Knowing this, we played the best beach soccer we’ve played all tournament, beating the team and improving our chances of potentially playing in the finals. Thankfully, luck was on our side when the 2nd place team lost their final game from a last second goal allowing us to advance to the National Beach Soccer finals to face the 1st place team from San Diego. After an action-packed final match, we unfortunately fell short by one goal and lost becoming the 2nd best team in the nation that year. Naturally, we all were very disappointed with the result, but at the same time we were hopeful that we had a bright future ahead of us in this sport given this was our “first” actual competitive tournament. A couple years had passed and we were invited to play in the U.S. Men’s Open as one of the professional Men’s teams representing Syracuse competing against many different teams from all over the world like Brazil, Barcelona and even our very own U.S. National Beach Soccer Team. This is pretty much summing up how my life of a professional beach soccer player began and we’re excited to be competing at this level and continuing the journey towards winning our very first U.S. Open. Until next time, find your beach!